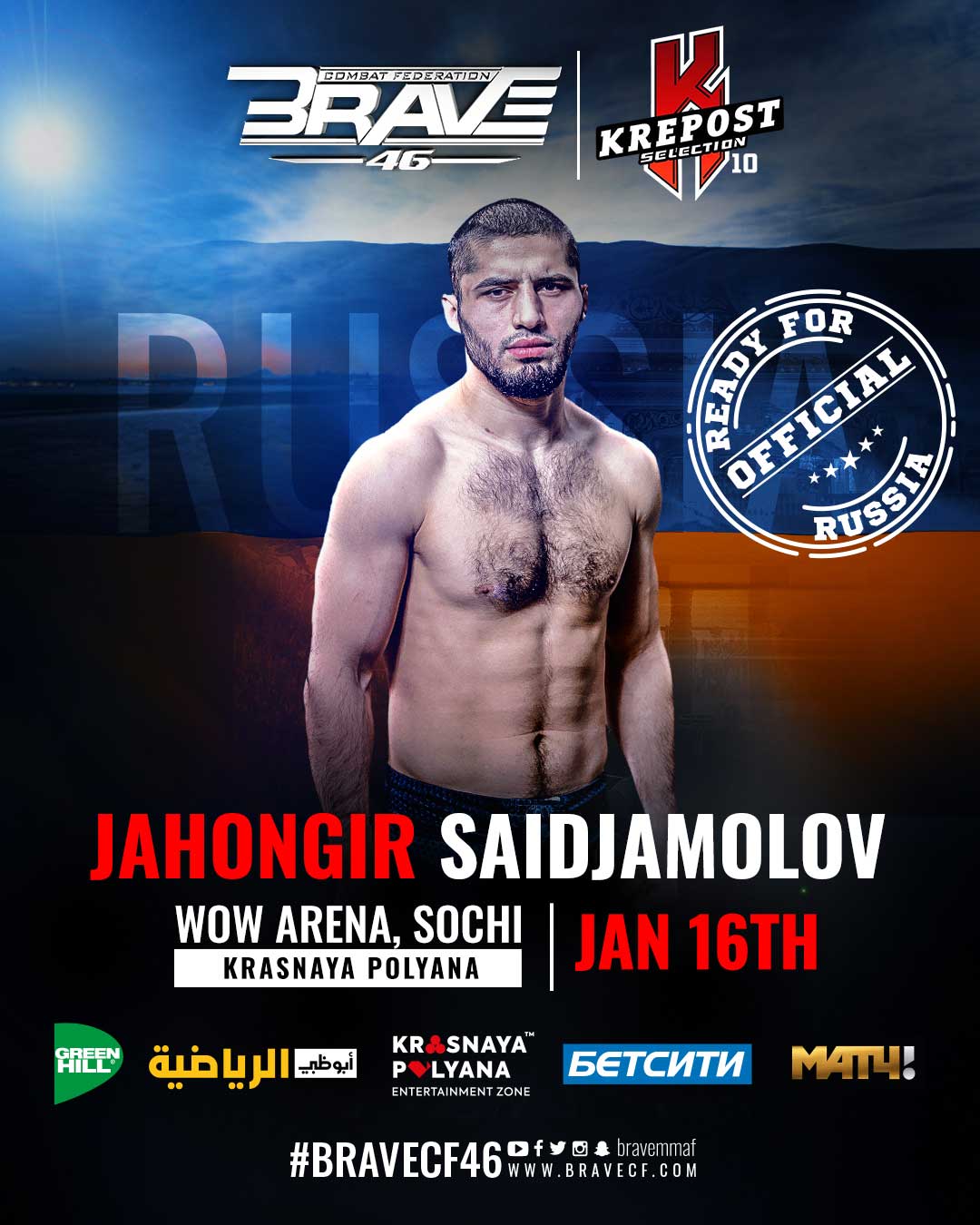 Tajikistan might not be a household name for MMA lovers just yet, but the country is producing some of the biggest stars of tomorrow and has a pathway to success with their IMMAF ties and investment in grassroots programs. One of the fighters that have benefitted from this approach is set for the biggest bout of his career. Tajikistan’s own Jahongir Saidjamolov will take on Kyrgyz superstar Abdisalam Kubanychbek in the main card of BRAVE CF 46, set for January 16th. 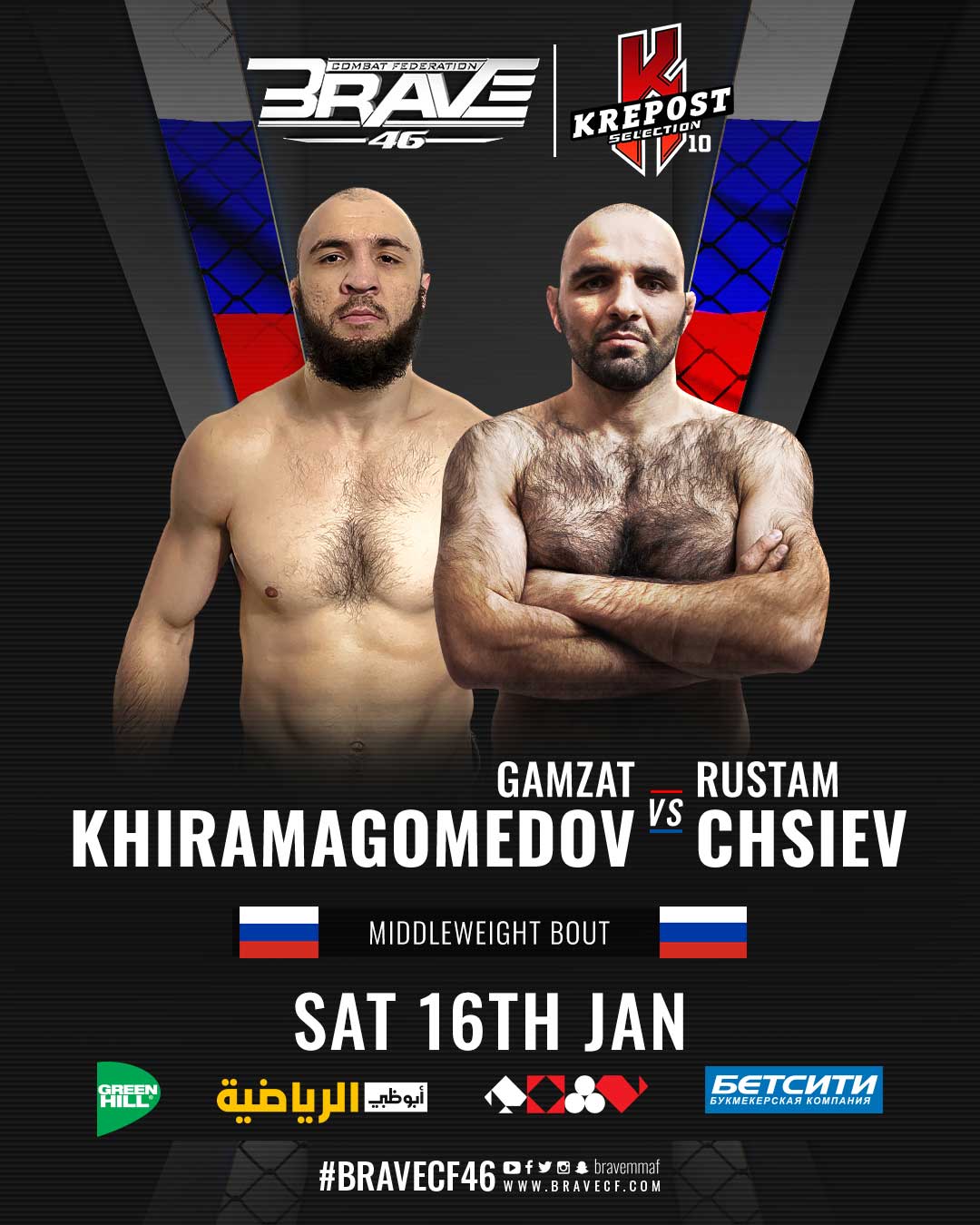 Over the past seven years of his professional MMA career, Gamzat Khiramagomedov has only lost once a total of 10 fights, and has already gotten back on track after losing his undefeated record. He will look to make an instant impact in his first bout for BRAVE Combat Federation, which takes place on January 16th, at BRAVE CF 46, in Sochi, Russia. He locks horns with grappling standout Rustam Chsiev in a much-anticipated Middleweight bout in the preliminary card of the fastest-growing MMA orga 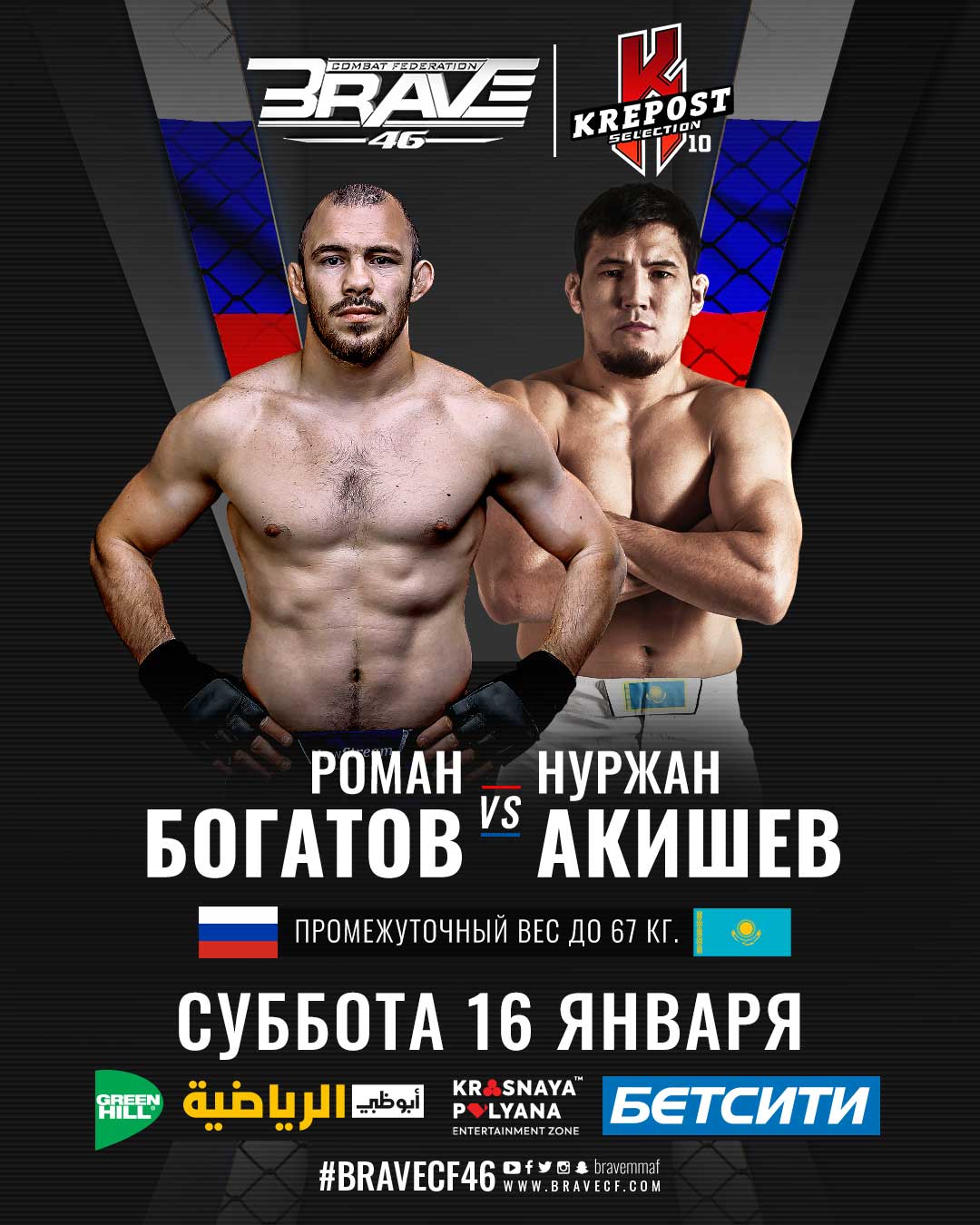 Nurzhan Akishev has been on a tear since becoming a professional fighter back in 2017. Since then, he has amassed a very impressive 11-1 record, putting together very good streaks in between his only loss. As he looks to make his international debut at BRAVE CF 46, Akishev is ready to take the next step in his development as a top tier martial artist.

Akishev will take on Roman Bogatov on January 16th, in Sochi, Russia, and will look to begin his road towards another belt in his colle 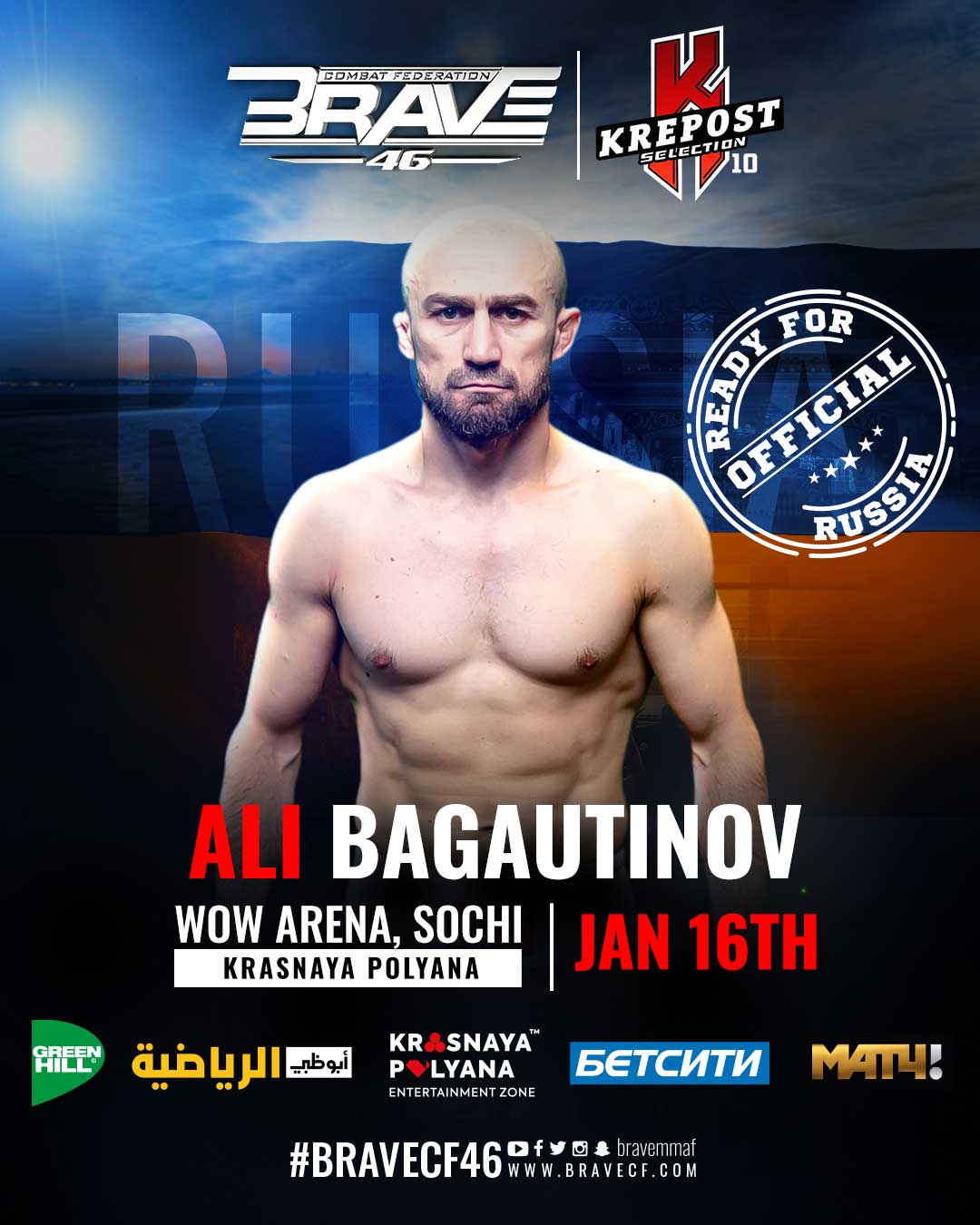 Ali Bagautinov was among the top Flyweights in the world when the division first came to the spotlight. But falling short on the world title meant that he would have to go back to the drawing board and reset his trajectory.

While he has yet to replicate in MMA what he accomplished in several other combat sports, Bagautinov’s legacy is there for all to see: a two-time sambo world champion, with relevant titles in several other sports such as wrestling, jiu-jitsu, and pankration, ‘ 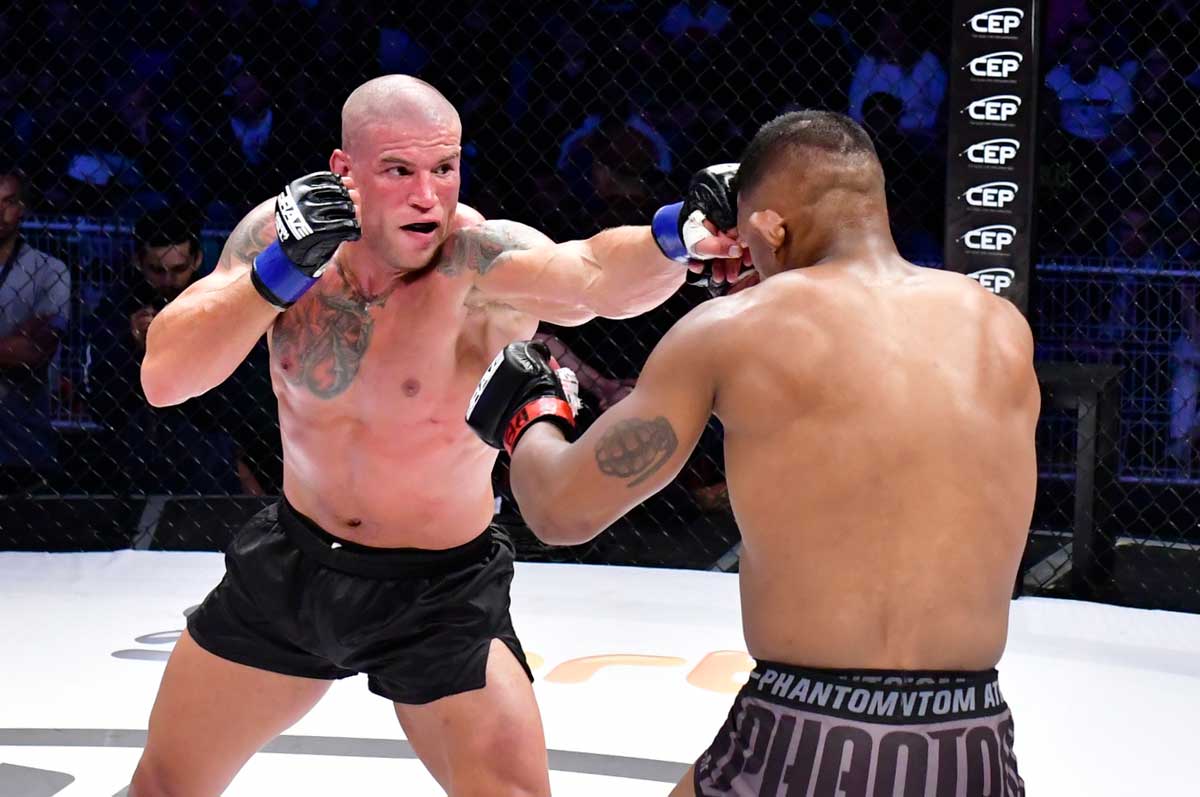 BRAVE CF Super Lightweight world title challenger Leonardo “Macarrão” Mafra arrived at BRAVE Combat Federation back in 2017 surrounded by expectation, being a very familiar face to the international MMA community and regarded as one of the most talented names fighting out of Southern Brazil. After dealing with last-minute cancellations, he would go on to fight for the fastest-growing MMA organization in the next year.

But all of this anticipation quickly turned into desperation. 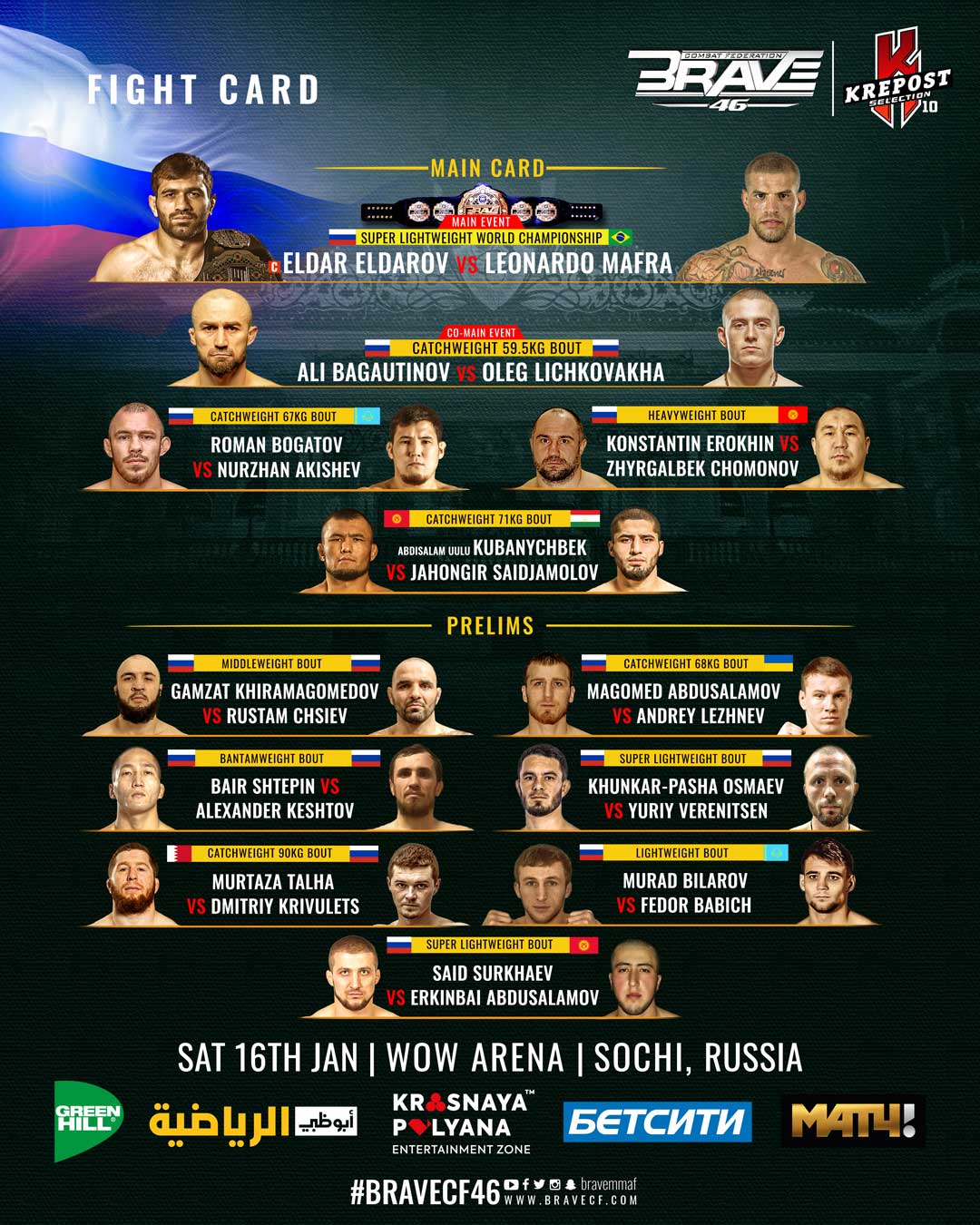 BRAVE Combat Federation has made it clear in the past few months that it intends to enter Russia for the first time with a bang. More recently, in the past few weeks, the fastest-growing promotion in the world has worked overtime to add exciting fights to the fight card. Now two more huge bouts have been added to finalize the card, which takes place on January 16th, in Sochi.

Both of the added fights are Super Lightweight fights, as BRAVE CF beefs up the weight-class. With the new cha