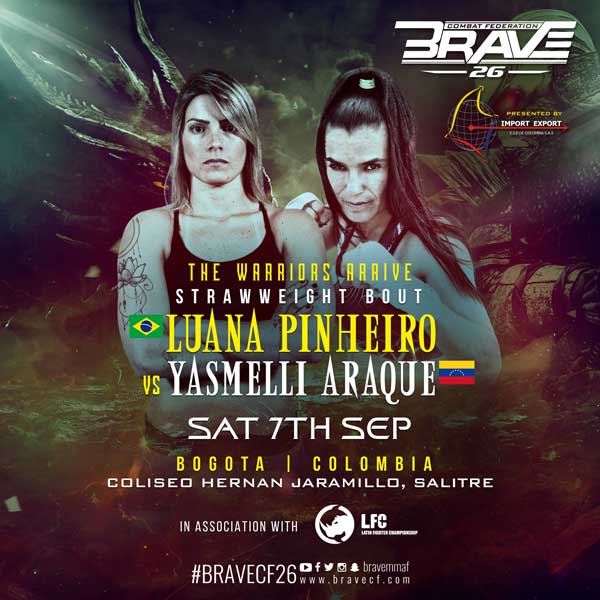 Judo champion and Women's MMA top prospect, Luana Pinheiro has a date set for her return to the BRAVE Arena. After an impressive debut victory last April, she is now scheduled to take on Venezuelan sensation Yasmelli Araque in the main card of BRAVE 26, set for Bogota, Colombia, on September 7th.

Luana started off her martial arts career in Judo, where she won a South American championship, before focusing herself in developing her mixed martial arts skills, in late 2016. Af 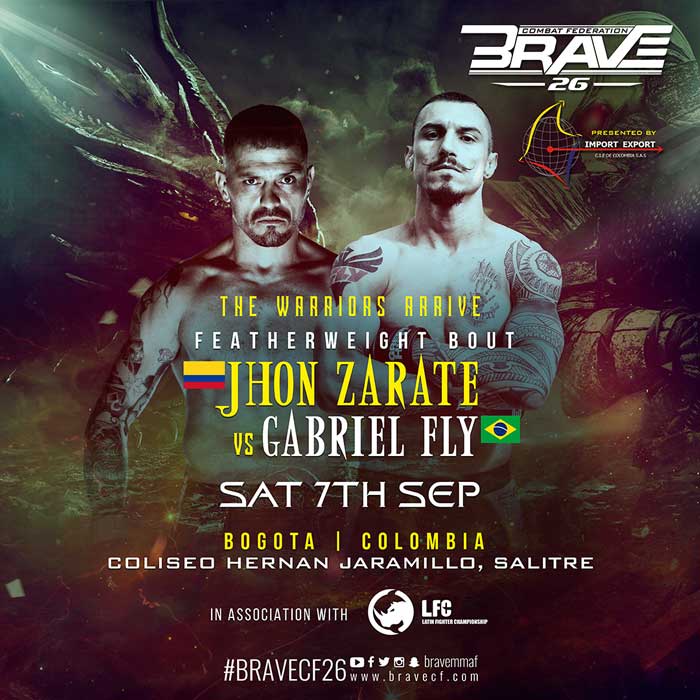 Featherweight contender Gabriel "Fly" Miranda will look to go back to the win column in his next bout. And he has a date and opponent set, as he will take on Jhon Zarate in the co-main event of BRAVE 26, on September 7th. The event will mark the first time the fastest-growing MMA organization in the world will host a show in Bogota, Colombia.

Gabriel has two bouts for BRAVE CF to date, with a win against Fernando Noriega at BRAVE 15, and a loss to Akhmed Magomedo 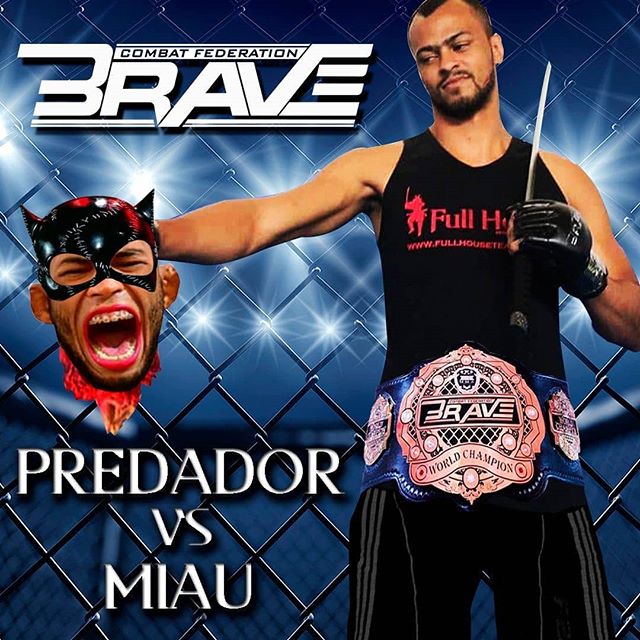 Lightweight title challenger Cleiton "Predator" hasn't earned his monicker by taking his opponents lightly. And the trend continues as he looks ahead to his first title fight when he takes on fellow Brazilian Luan "Miau" Santiago at BRAVE 25, set for Belo Horizonte, Brazil, on August 30th.

Cleiton has vowed to beat Luan badly and wants to make the reigning, defending BRAVE Combat Federation world champion cry after their bout, which will serve as the main 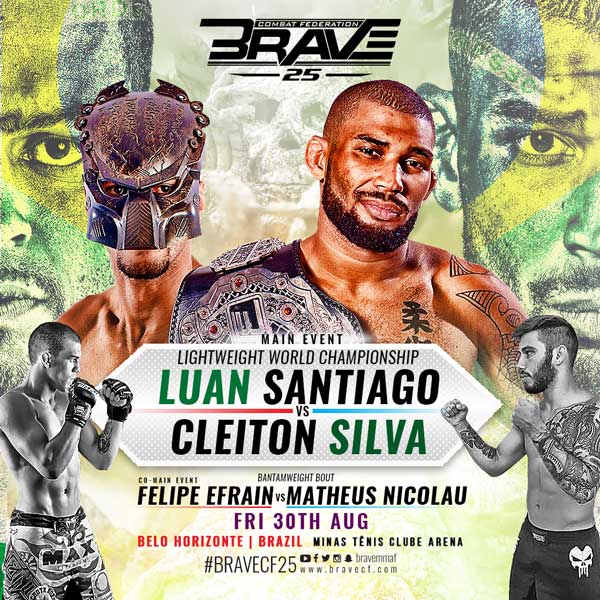 BRAVE Combat Federation has released the full fight card for its much-anticipated return to Brazil. The promotion lands back in Belo Horizonte for BRAVE 25, on August 30th, in the Minas Tênis Clube Arena, and will feature one of the biggest fight cards for its fans, with a monumental title fight in its main event. Lightweight world champion Luan "Miau" Santiago takes on KO artist Cleiton "Predator" for all the marbles.

In the co-main event, Felipe Efrai 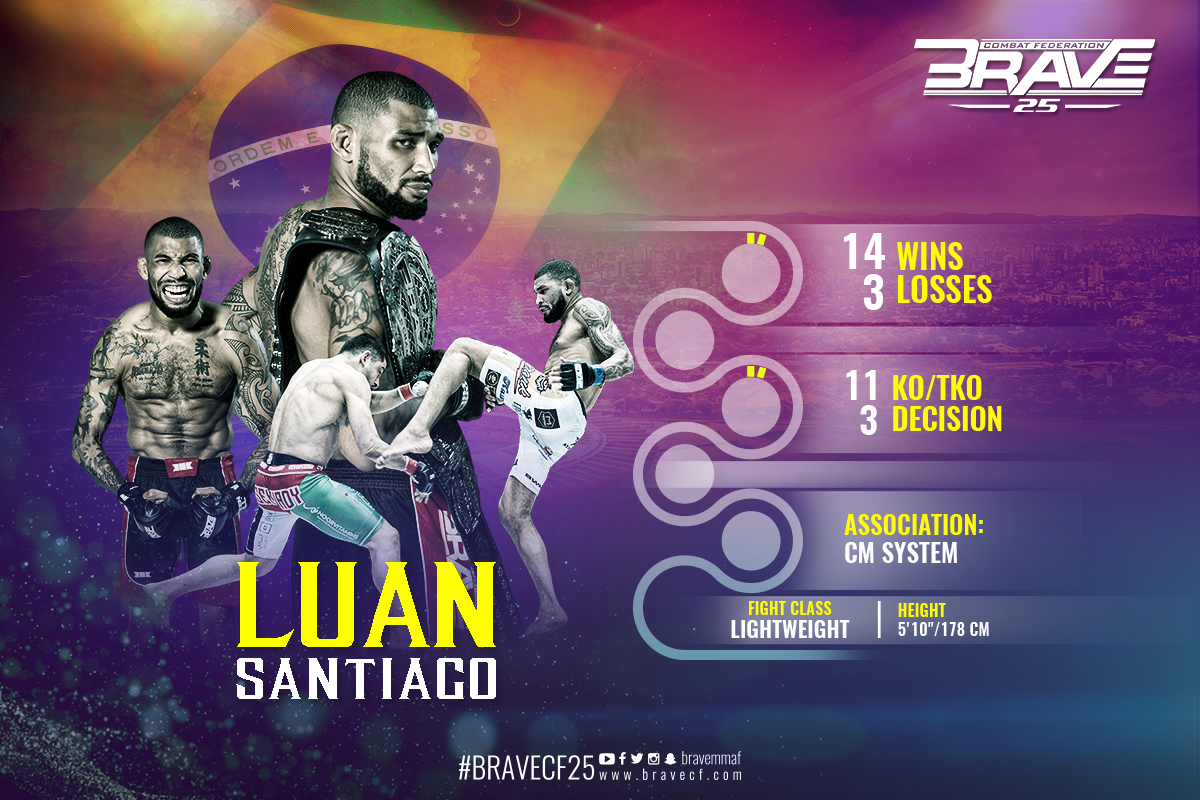 Luan "Miau" will defend his crown in hostile territory... Again

Luan "Miau" Santiago is back. In his native Brazil, the BRAVE Lightweight world champion will defend his title against dangerous contender Cleiton "Predator" Silva.

Even though he's only 24-years-old, Luan has fought around the world, thanks to BRAVE Combat Federation.

In April of this year, he went to Jordan as Abdul-Kareem Al-Selwady's first challenger.

Al-Selwady is one of Jordanian MMA heroes, a young man who needs no i 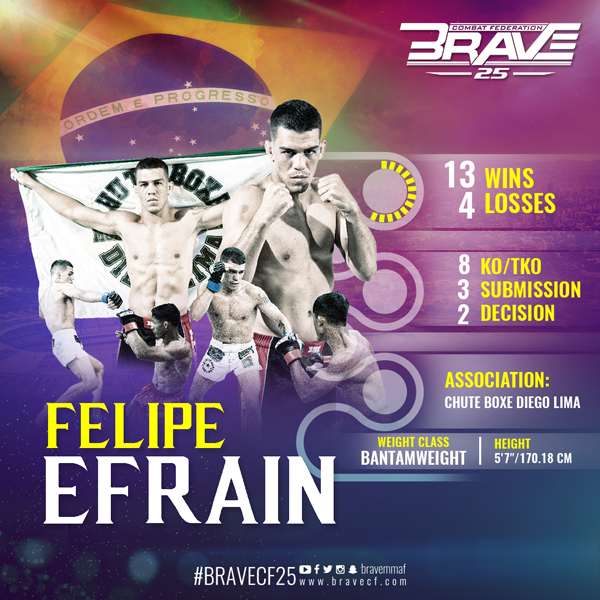 Felipe Efrain was born in Brazil, but he's a truly international fighter.

As is the case with most MMA athletes who rise to stardom, the BRAVE CF Bantamweight contender has traveled around the world looking for a challenge.

Before BRAVE, he fought in the United States and Japan with different organizations.