BRAVE Combat Federation is celebrating tremendous milestones on April 1st with the largest fight card in the history of the promotion, BRAVE CF 50, taking place at the historical Arad Fort in its home country, the Kingdom of Bahrain.

BRAVE CF did not only complete 50 events in 4 years and 6 months, it broke into the global market by visiting 21 countries across 5 continents making it the number one mixed martial arts promotion in Asia.

The entire world is keeping an eye out for who will grab the inaugural title as the best roster of Flyweights in any organization look to prove a point. The tournament began with fighters from Europe, the United States, Latin America, and Russia, however only two nations remain standing: the United States and Russia.

A Russian MMA legend, Ali “Puncher King” Bagautinov will be facing America’s Dustin Ortiz in the last quarter-final bout of the Flyweight tournament. Bagautinov specifically called out Ortiz after his victory at BRAVE CF 46 which landed him a spot in the tournament. The winner will be facing Jose “Shorty” Torres who defeated Blaine O’Driscoll at BRAVE CF 49 moving into the semi-finals.

Also set for BRAVE CF 50 is the first semifinal of the competition. Russia’s Velimurad Alkhasov is facing America’s Zach Makovsky at BRAVE CF 50 on April 1st. The two fighters have faced in the past with Makovsky winning via split decision making this fight an even more heated encounter for the two fighters, since it is, to this day, the only blemish in Alkhasov’s record.

The Flyweight tournament bouts are only part of what BRAVE Combat Federation is bringing to fans at BRAVE CF 50. The night will include two title fights: Jarrah “The Jordaniain Lion” Al-Silawi defending his BRAVE CF Super Welterweight World Title against Ismail “The Austrian Wonderboy” Naurdiev, as well as the current BRAVE CF Middleweight World Champion Mohammed Fakhreddine attempting to make Arab MMA history as he fights for the vacant BRAVE CF Light Heavyweight World Champion Title against Mohamed Said Maalem. Fakhreddine will attempt to become the first Arab fighter to hold two world titles in two-weight classes simultaneously and the first BRAVE CF fight to accomplish such a feat. 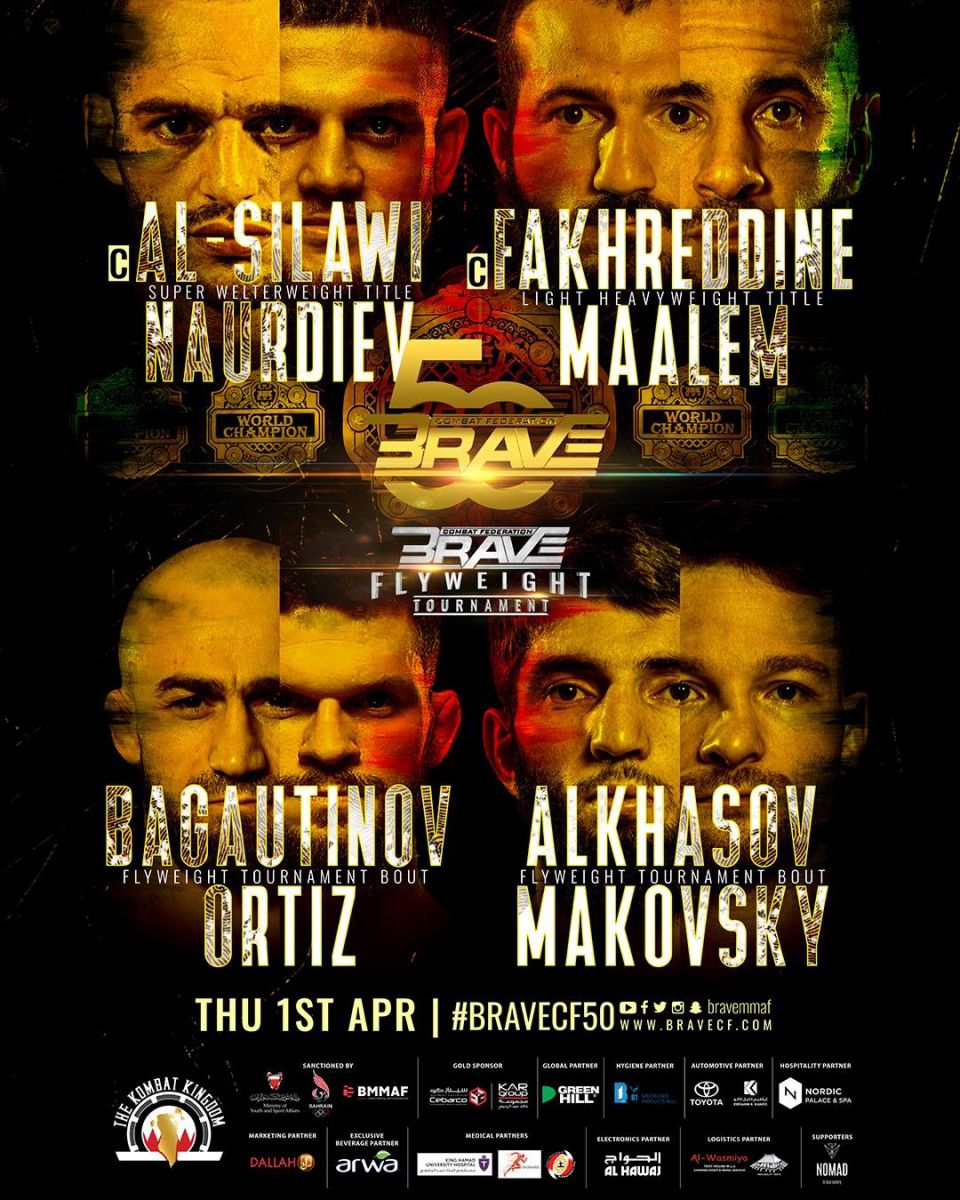 The event will be broadcast to fans across the world to join the fastest growing promotion in the world’s celebration of being one of the top promotions in the world on BRAVE CF TV on Thursday April 1st at 5:30PM (GMT+3). It will be live and free with registration at bravecftv.com.