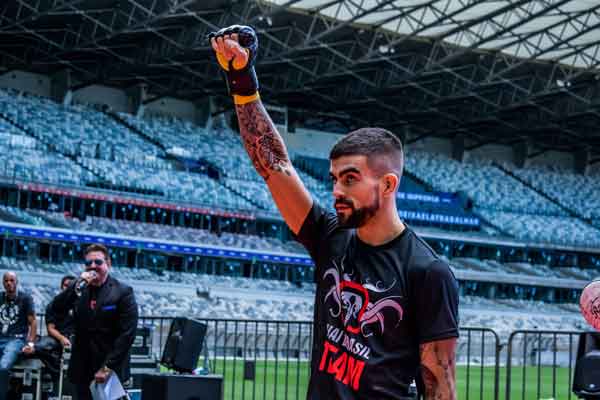 Even if he wanted to, Marcel Adur could not get away from fighting or mixed martial arts. The old cliche of living and breathing MMA rings true to his ears.

A BRAVE CF Flyweight contender, the Brazilian prospect is tuned in to fighting at all times. His social media is filled with training videos and photos.

The only person that shares that much space with fighting in his life (and his Instagram feed) is his girlfriend, Nicolle Caliari.

A native of Santa Catarina, in Southern Brazil, Adur has moved further down to Curitiba, where he trains out of Thai Brasil, an up-and-coming gym that focuses on his success and is aimed at developing the art of striking.

One of the best pure muay thai fighters in the BRAVE Combat Federation roster, Marcel thrives in that environment, especially since he can't ever fully disconnect from MMA.

That's because Nicolle is a fighter herself, who also represents Thai Brasil.

The couple can be spotted all over Curitiba training in the many parks and outdoor facilities the city provides, not mentioning the many wars they go through daily in the gym.

When it's time to come back home, they discuss training, future career plans, and watch fights.

The formula seems to be working. Even though Marcel is coming off a loss to Velimurad Alkhasov, his BRAVE CF record is off the charts, and he has three victories by knockout in his resume.

He made his promotional debut in the organization's first trip to Brazil, back in March of 2017, and was matched-up against Ivan Lopez, who rocked him in the first round before succumbing to a barrage of punches and knees from Adur in the second frame.

His next two fights were also in Brazil, where he was able to get quick knockouts against Rodrigo Melonio and Fernando Laurenco.

Three straight knockouts delivered and a title shot was the only logical next step for him.

Adur traveled to the Kingdom of Bahrain, with his new coaches and girlfriend. He made weight and accepted a fight against Alkhasov, who was unable to go down to the Flyweight limit.

This meant the Flyweight belt would only have an owner in case Marcel won. He had his moments, but was ultimately unable to resist the world sambo champion's takedowns and ended up suffering his first BRAVE defeat.

That was in November of 2018. Instead of picking another fight immediately, he chose to focus on his training. Adur has spent the last few months working on his takedown defense and overall wrestling game.

But now he has a fight in front of him. He will take on promotional newcomer Marlon Derik, a Belo Horizonte native, who will most certainly have the support of the crowd at BRAVE 25, set for August 30th.

For Adur, the belt, and fighting itself are a love story and a gift to his girlfriend.