BRAVE CF 25 main event features no hatred, only a search for domination 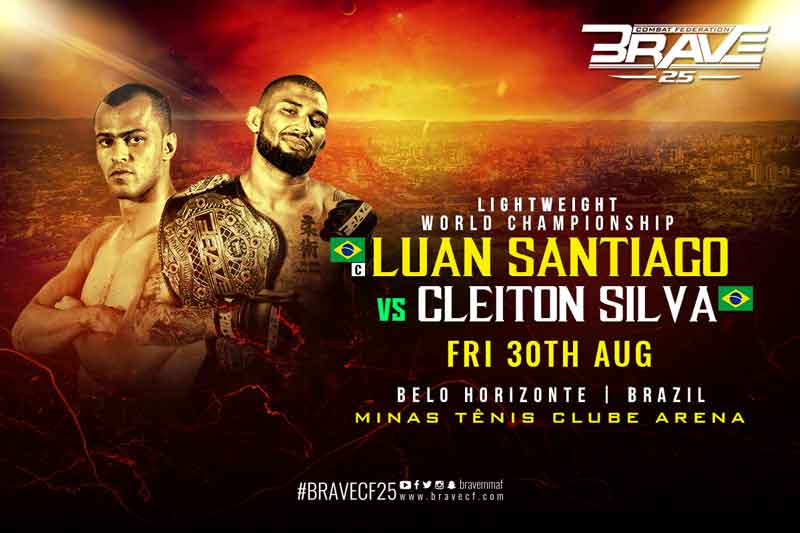 Two Brazilians. One champion. The theme of BRAVE 25, set for August 30th, in Belo Horizonte, Brazil, seems quite simple.

However, there's more to it than meets the eye.

Luan "Miau" Santiago and Cleiton "Predator" Silva are mirrors of each other. Two outstanding strikers with dangerous submissions in their arsenal.

They will face each other in the main event of BRAVE 25, with Luan's Lightweight world title on the line.

Cleiton will be involved in his first main event, and his first fight for a world title, a landmark moment for the 33-year-old.

In front of him, a hungry champion lies in waiting.

Luan "Miau" Santiago, 24, is fresh off the performance of a lifetime.

In an arena that was hoping, cheering and chanting for his demise, Santiago battled then-champion Abdul-Kareem Al-Selwady, the fans' favorite fighter in Jordan.

Luan dominated, connecting with his long arms and ending the fight with one of the most devastating knockouts in MMA history.

His spinning-back elbow was heard around the world, and the KO went viral on social media.

"Miau" is now a celebrity in Brazil, especially in his adopted hometown of Curitiba.

However, he will have to deal with a hostile crowd, once again.

Considered by the Belo Horizonte MMA scene as one of its most talented athletes, "The Predator" is one of the city's favorite athletes and has a perfect record inside BRAVE CF.

He beat Ahmed Amir in April of last year, in a bloody battle that left scars in both fighters.

A few months later, Cleiton traveled to Colombia for his first international fight.

He showed no signs of being nervous, as he controlled and dominated Argentina's Marcelo Bustos, finishing him with a perfectly-placed rear-naked choke.

The win was enough for him to be in line for a shot at the title.

While there's no hatred between both men, Luan has what Cleiton wants. The BRAVE Combat Federation world Lightweight title. In Brazil, that's enough to develop a rivalry.

Even though Luan is only 24, he has all the fame, accolades and has forged an established career.

Santiago has fought all over Brazil for BRAVE, as well as in the Middle East.

He's seen by specialists as the next big superstar in mixed martial arts and beyond.

Cleiton, on the other hand, has none of these things. While he balances life as a coach and a fighter, he dreams of the recognition and accolades that come with the championship.

He will not stop until he's recognized, truly, as the best in the world.

In order to do that, Silva will have to go past a young man that has everything that he wants, a mirror of where he wants to be in the next years.

In Brazil, that's enough to develop a rivalry.