BRAVE CF 25 card will shake world MMA to its core 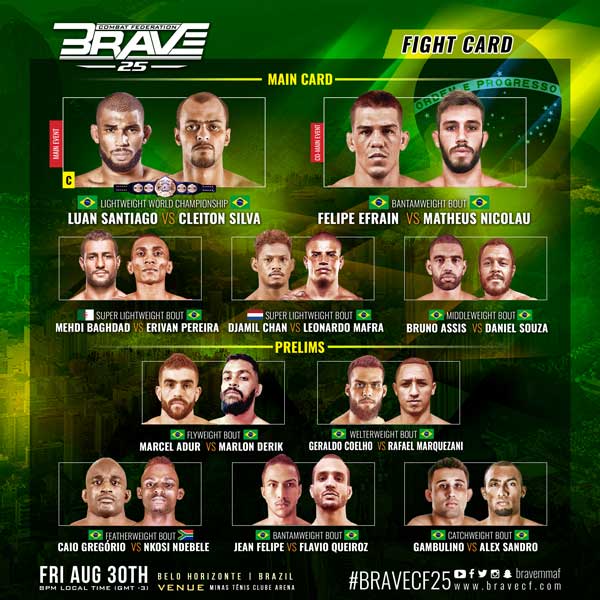 BRAVE 25 takes the fastest-growing MMA promotion in the world back to the home of mixed martial arts for the fourth time.

Brazil is the second home of BRAVE Combat Federation, and the promotion goes the extra mile to always deliver a huge event.

BRAVE 25 is no exception.

From the first fight to the last, there will be no stop to the action.

He's one of the stalwarts of the Belo Horizonte MMA scene and has been instrumental in developing the sport in the city and beyond.

He's a member of Gordin Fight Team, whose leader is now a state congressman, proof of the influence the team holds over mixed martial arts in the region.

The fight card will also feature prominent members of CM System, one of the fastest-growing MMA teams in the world.

Led by legendary fighter Cristiano Marcello, the gym will be represented in the preliminary card by BRAVE CF veterans Geraldo "Luan Santana" and Maria Ribeiro.

Both fighters are known for their unique KO power.

And, as they look to bounce back from unexpected losses, the expectation is for two more devastating finishes.

Former BRAVE CF Flyweight title challenger Marcel Adur is one of the hardest punchers in the division.

Fans, pundits and trainers have been amazed about the weight of his hands, even though he officially weighs in at just 57kg.

Adur has fought in all BRAVE events in Brazil and is undefeated in the previous three fights he had in his home country.

He will look to continue that trend against Marlon Derik, a newcomer with nothing to lose, the most dangerous combination in mixed martial arts.

The main card will have its share of foreign stars, as they make their way to Brazil for a battle against two different opponents: the opposing fighter and the passionate crowd.

The Dutch striker would love to pulverize his own record against Leonardo "Macarrão" but knows he has his hands full against his fellow striker.

Fighting out of the famed Kings MMA gym, Leonardo is coming off an injury, which almost ended his career. His comeback won't be complete without a victory at home, though.

Mehdi Baghdad is of French-Algerian descent but won't feel completely away from home at BRAVE 25.

He speaks good Portuguese, has lived in Brazil before and trains in Rio de Janeiro.

However, he will face a future Brazilian star in Erivan Pereira, so he won't be expecting a shift in the crowd's tastes anytime soon.

Finally, the co-main and main events will rock the Minas Tênis Clube Arena with the finest action in Brazilian MMA.

Still licking the wounds from his title fight loss to champion Stephen Loman, Felipe is a striker with no fear of the ground game.

Nicolau will look to test his resolve in jiu-jitsu and grappling, as the newcomer specializes in taking the fight to the mat and finishing his opponents there.

A battle of wills, if you will.

In the main event, two of Brazil's best fighters will face each other.

At 24, Luan "Miau" Santiago is a legend in the making. From his public persona to his fighting style, he's a superstar.

His biggest test will come in the form of a hunter, a predator. Cleiton Silva, aptly nicknamed as "The Predator", will look to ruin Santiago's rise to the top.

Cleiton will have the support of the crowd but knows that he needs more than that to snatch the belt away from Luan.

Ten different questions will be posted. Ten answers will be given on August 30th.