Over the last few months, Lightweight rivals Amin Ayoub and Ahmed Amir have built an ongoing rivalry that was supposed to have its outcome decided on BRAVE CF 50. It wasn’t to be, though, as Amir ended up pulling out due to injury. However, the banter between the two mixed martial artists extended far outside the cage, and even during fight night when Ayoub competed - and won - in a non-title contest.

Curiously, Ayoub wasn’t the original speck in the eye of Amir as the Egyptian bruiser chased to exact revenge on Cleiton “The Predator'' Silva, whom he shared a bloody history with when they fought at BRAVE CF 11 in April 2018.

Silva walked out of the grueling encounter with his hand raised in triumph, defeating Amir by way of second-round stoppage. More than a year after their encounter, the Brazilian captured the BRAVE CF Lightweight World Title at the expense of compatriot Luan Santiago.

When Silva was slated to make his first defense against Ayoub at BRAVE CF 44 in November 2020, Amir invaded the weigh-ins and issued a dramatic challenge.

But things didn’t go according to plan as Silva bowed to Ayoub via fourth-round knockout. With the Frenchman now having the silver-plated strap in his possession, Amir targeted the newly-minted champion. From there, it escalated quickly as they went back-and-forth on social media and in interviews. 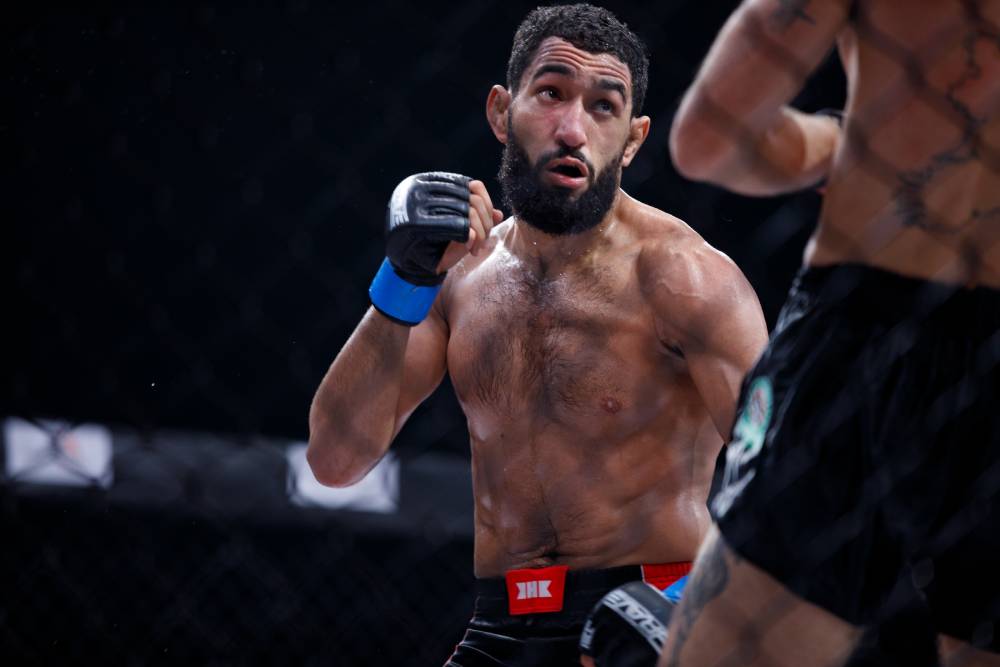 Both Ayoub and Amir had the chance to settle their beef with each other at BRAVE CF 50, but the latter was on the receiving end of an unfortunate news as he needed to pull out of the bout due to a neck and shoulder injury.

As a result, Mashrabjon Ruziboev stepped in and took Amir’s place to face Ayoub in a non-title, 74-kilogram catchweight contest, where the French champion came out triumphant via unanimous decision.

Ayoub was in the middle of his celebration when Amir surprisingly came out of nowhere and engaged in a heated verbal exchange. Though security and officials inside the venue were able to ease the tension, it is far from over between the two.

“Ahmed Amir talks too much. Now, he has to be a man and do what he says he wants to do to me,” Ayoub stated. He pulled out. He canceled the fight because of an injury. I had an injury two weeks ago, but I didn’t pull out like Ahmed Amir.”

“Even though I got an injury, I still went to fight because I’m the BRAVE CF Lightweight World Champion. I have a name and reputation to protect,” he added.

Meanwhile, Amir downplayed Ayoub’s credentials as a competitor in the sport, believing that he has what it takes to dethrone “Fierceness” as the kingpin of the lightweight division.

“I was expecting a much better performance from him (Ayoub), but he had a very bad performance against a short-notice opponent. Is that what you call a champion? If he fought me like how he performed in his last fight, he wouldn’t be the champion today,” the Egyptian contender stated.

“I promise you when I fight him, I will smash him,” Amir continued. “I will remind him of his childish social media antics. The talk is over. I promise I will beat him and take his belt.“

To Amir, knocking Ayoub off his perch will be merely the icing on the cake as he is keen on becoming the man who will have the last laugh in an intense rivalry that has now turned into a personal bad blood.

It seems that the stakes are much higher than before, pointing at the possibility that it will be just a matter of time before Ayoub and Amir stand opposite each other on the BRAVE CF stage.